“Tssk argh!” I heard Xu Heng shouting in discomfort from his treatment bed, “Are ya trying to bleed me dry woman?!” Bai Xia cackled maniacally and Feng Bo chuckled at the ex-triad member’s discomfort from their own beds. The Haqqislam doctor ignored his protests and finished taking the blood sample with sure and expert movements.

The soldiers were in the final stages of their L-host rehabilitation treatment. After the disaster at the Wei Chun facility Crane Liu Fe had directed us to the Tranquility Oasis Resurrection Clinic. The Resurrection Clinic was ensconced at the centre of one of the deniable Special Reclusion Units, also known as the Imperial Service’s Invisible Prisons. The restraints on the treatment beds brought some disturbing questions to mind about the normal activities the clinic.

“Look Captain, I go way back with Liu Fe but tell him we’re level after this,” Markus Veitler explained. Liu Fe had put me in touch with the agent, vouching for his reliability. “I managed to get the L-hosts for your guys by fudging some records but the clinic administrator is asking questions. You’re gonna have to leave sharpish before she talks to someone in Imperial Service Command and they link you to the Wei Chun incident.”

I nodded, my thoughts mirroring his own. I lowered my voice as a nurse walked past to run a test on one of the resurrected Zhencha, “Feng Bo and Bai Xia are ready. I’ve already identified a-”

I was interrupted by a gurgling scream from the Zhencha. The room went deadly silent in the frozen second as everyone stared at the nurse calmly withdrawing the scalpel from the Zhencha’s mutilated throat. With a roar the room erupted in chaos. Knives appeared in the hands of the doctors and nurses who leaped on the recovering Strike Team members.

The pounding of a Red Fury ended the chaos as the Mowang unit pushed into the room. After confirming that the rest of my troops were fine I checked the urgent alarm on my comm.

“Sir, we’ve got trouble,” the Zhencha I’d posted on guard reported, “There’s a host of Haqq soldiers moving on our position led by that administrator. Sir, there’s a lot of them.”

“Markus. Captain. You are wanted by the Imperial Service for questioning,” the pompous voice of the clinic administrator rang over the loud speaker. “Please relinquish your armour suits, lay down your weapons, and surrender yourselves. You have my word no more of your soldiers will come to harm if you obey my orders.”

“Fuck that,” I muttered. “Strike Team, mount up! We’re fighting our way out! Priorities are taking out their commander and killing that damn administrator!” 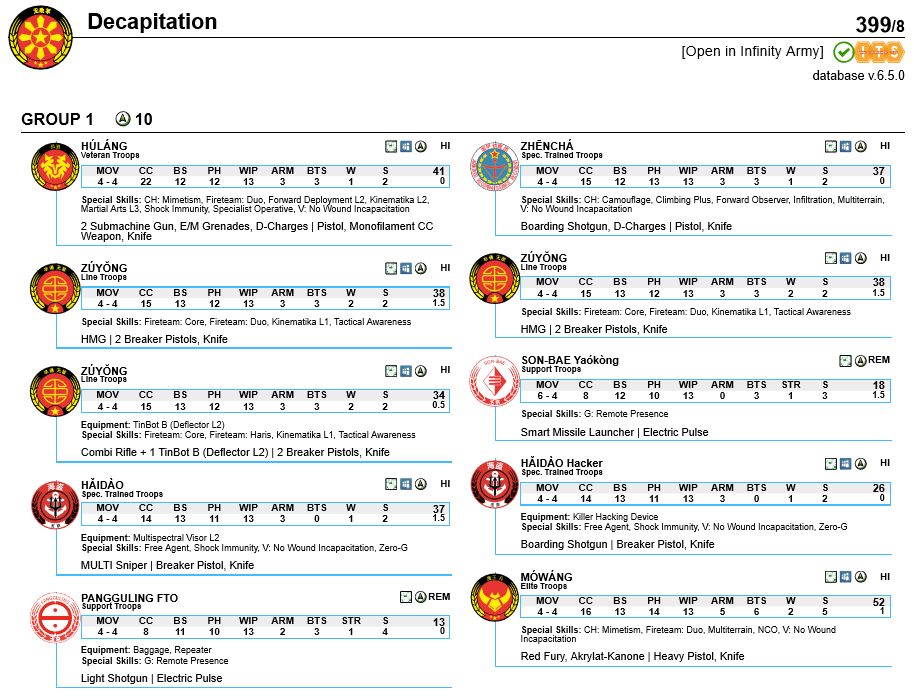 The team burst out of the medical centre and took up overwatch positions. A shout of Arabic announced three Muttawi’ahs charging towards the team. The roaring of HMGs and missile launcher explosions drowned out their death cries. A cloud of smoke erupted from a grenade on the left flank where the Hulang and Mowang were taking cover.

“Sir, we’ve got something moving in the smoke,” the Hulang tersely reported. I watched across the courtyard as the shimmering silhouette of a Zuyong emerged from the smoke. “Cancel last, it’s one of ours,” the Hulang radioed in relief. “Wait… why’s he got-”

I watched as the image of the Zuyong dropped, revealing Hussein Al-Djabel sprinting forward to match blades with the startled Hulang. With a swift strike he knocked the Hulang down and leaped towards the Mowang. As the Mowang dodged Al-Djabel’s next swing a pair of sniper rounds pierced the lingering cloud of smoke and blasted into the back of the Hassassin.

“Got him sir.” The Haidao sniper reported as he scanned his Multispectral Visor across the smoke for more impersonators.

The sniper’s attention was quickly drawn back to the front as a Daylami sent a Panzerfaust flying towards the fireteam. A hail of HMG, missile, and sniper fire ended the threat.

A glint from the top of the tower caught my eye. “Sniper! Fireteam, 200m, top left corner of tower, rapid fire!” A rattle of HMG fire, the snap of the MSR, and the explosions from the missile launcher again accompanied the disappearance of another red dot from my tactical display.

“I’ve got three Ghulam approaching along the walkway! Which do we engage?” One of the Zuyongs radioed in.

“Wait out. Something’s not right…” I responded, comparing the tac display with my visual feed. “Two of them don’t have shadows!” I shouted in realisation as the Haqqislam heavy infantry suit raised its sniper rifle. Luckily the fireteam had been equally wary and the Ayyar fell in a hail HMG and sniper rounds.

Thwarted by the impenetrable wall of the Zuyong fireteam, the Hassassin Bahram force fell back enough for me to push out a counterattack. One of the Zhencha, keen for revenge for her murdered squadmate, led the charge. She flickered out of camo state as she vaulted a low wall, catching 3 Ghulam in the blast of her shotgun. Two of the Ghulam disappeared as the shells tore through their holoechoes and the third revealed himself as he sprayed his Nanopulser back.

The two traded frantic blasts of their weapons before the Zhencha left Husam Yasbir’s corpse in bleeding tatters on the floor.

“Found the Administrator, moving in,” the Mowang sent as he clomped towards the tower with Pangguling in tow. The bark of his heavy pistol was followed by the report that the Adminstrator was down and bleeding out.

“Three more Ghulam sir. These ones don’t seem to be reacting. Might be more holoechoes.” The rattle of HMG fire preceded the confirmation as the Zuyong fireteam took out the three Ghulam, the last revealing itself to be another Ayyar.

I’d grown confident from our breakout success and left the Mowang exposed on the left flank. “Systems hacked! I’m immobilised! Initiating reset,” came the frantic call from the super heavy infantry unit as a Ragik crept up behind him.

“Come on. Come on. Reset already damn it!” I muttered as I spotted an Asawira and two Muyib’s advance on the frozen Mowang. Even the Mowang’s heavy armour couldn’t fully protect it as one of the Asawira’s Spitfire rounds punctured the plating. The Asawira drew it’s wicked sword as it and the Muyibs walked up to the Mowang. I watched in horror as it pulled back the sword for a killing blow and was shocked when the Mowang pulled its heavy pistol up and fired. The Asawira’s blow went wide, piercing a shoulder joint rather than the Mowang’s throat.

My relief was short-lived as one of the Muyibs snuck behind the Mowang and managed to place a D-Charge on his back. The explosion ripped into the body of the heavy infantry unit, leaving a pile of broken armour and blood shrouded by smoke.

“Shit they’re going after Markus! Fireteam, focus fire on that Asawira!” I yelled as the heavy infantry haris poked his head around the corner.

A bombardment of missile rounds caught him and the two Muyibs (one of whom was the enemy lieutenant), killing them in the explosive fireball. Unfortunately, it wasn’t quick enough to stop the Asawira gunning down Markus with its Spitfire.

I watched Markus’ bleeding body twitch on the ground and slowly roll on to its front. “He’s still alive!” I cheered as he began ponderously dragging himself towards cover. My relief was abruptly cut-off as the Hassassin Ragik emerged from the burnt ruins of the haris team and put a shotgun round into the back of Markus’ head. I just had time to see the agent’s head disappearing in a mist of red before the now-familiar whistling and roaring of missiles engulfed the Ragik in a fireball.

Realising they’d be been thwarted by the superior firepower of the Invincible Army and without their primary commander, I watched as the Hassassin clean up squad began preparing to withdraw. I cursed as I spotted a Nasmat remote scampering across multiple fire lanes with impunity before reaching the unconscious Administrator and reviving her.

“We’ve got a clear corridor Boss. Do you want us to push for the shuttle bay?” I heard  Feng Bo radio in.

“Take your fireteam forwards,” I ordered, “But we need to stop the Administrator from getting out of here alive.” I directed the Pangguling remote to chase down the Administrator but it was isolated by a Muttawi’ah Jammer before trading shtogun and chain rifle blasts, sending both unconscious.

A quick order to the Zhanshi Gongcheng saw a Yaozao remote trotting up to the poorly Pangguling and repairing it. With no further opposition I watched in grim satisfaction as it chased down the revived Administrator, finally riddling her body with shotgun blasts and reducing her Cube to smoking fragments.

My opponent Alex conceded at the end of Round 2 with only 3 orders left. After the absolute pounding to his NCA last match this was a welcome victory.

Much of his strategy relied on holoprojector L2 and Surprise Shot L2 which was negated by my Zuyong fireteam, or Hussein Al-Djabel taking out my Mowang (Data Tracker). I was terrified by Hussein Al-Djabel but had my MSV2 sniper Haidao watching for when he emerged from impersonation and got very lucky with the Mowang’s dodge roll.

The circular template for the fireteam’s missile launcher caught Alex out when I got the Asawira+Muyib fireteam which let me really jump in the lead with Objective Points by taking out the Muyib Lieutenant.

400pts was fun as it allowed me to try the Mowang on top of an HMG-heavy Zuyong fireteam and reinforced the need for an engineer in the list.

View all posts by Tao Ji